Female morning DJs put their spin on the air 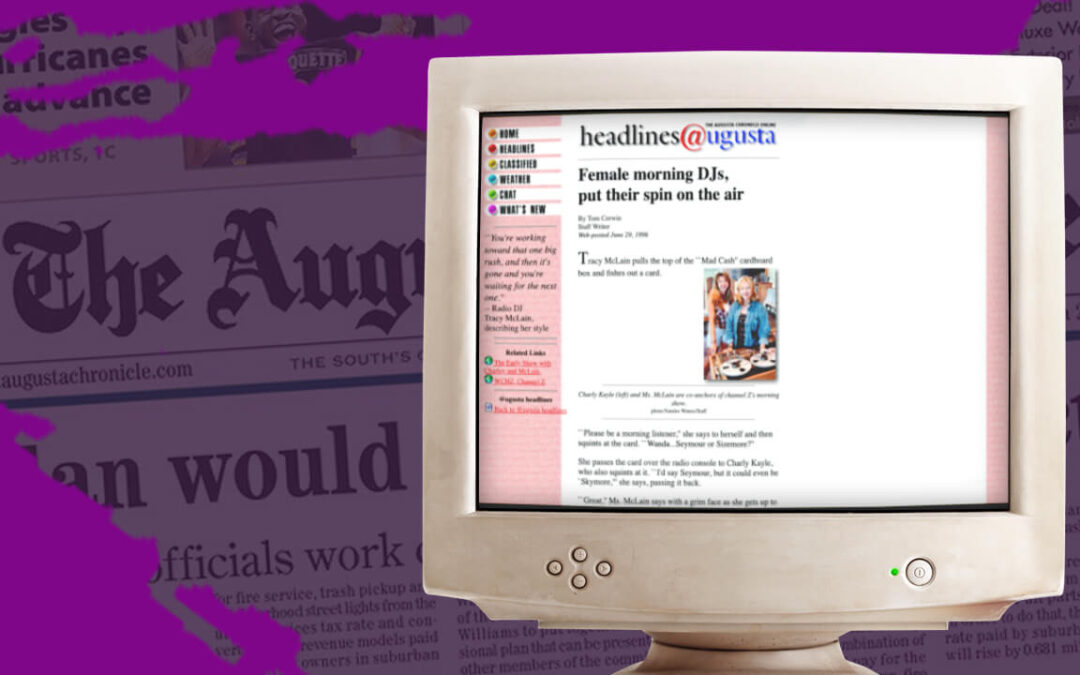 Originally Published in the Augusta Chronicle

Tracy McLain pulls the top of the “Mad Cash” cardboard box and fishes out a card.

“Please be a morning listener,” she says to herself and then squints at the card. “Wanda…Seymour or Sizemore?”

She passes the card over the radio console to Charly Kayle, who also squints at it. “I’d say Seymour, but it could even be Skymore,”’ she says, passing it back.

“Great,” Ms. McLain says with a grim face as she gets up to wander down the hall to talk to her boss, Eric Hall. She returns with a sardonic grin.

“He says I should say ‘Wanda See More Money,”’ she says to Ms. Kayle, who also grimaces. “That one has about a cheese factor of 8.”

It’s 8:05 a.m. at radio station WCHZ, and The Early Show with Charly and McLain has been on the air about 2 hours. At 8:20 a.m., Ms. McLain will shake the box under her microphone and pretend to draw the name, then repeat the conversation the two just had, including the “cheese” comment, for the listeners.

In the end it doesn’t matter – Wanda Seymour/Sizemore/Skymore doesn’t call within 9 minutes, 51 seconds to claim the money. And the show has already moved on to poking fun at the “fat police” and Marge Schott.

It is a typical morning for an unusual show, one of only a handful of female tandem morning shows in the country. Just two months along, the duo is working hard to win over both male and female fans even as they piece together their program.

While women are a part of morning shows across the country, they are usually just window-dressing for the male hosts, and morning shows continue to be male-dominated, said Leslie Fram, who shares a morning show with two men on radio station WNNX 99 in Atlanta.

Ms. Fram said most program directors are men and just feel more comfortable having a male morning crew. Women have only recently cracked the midday radio slots, a time program managers thought that mostly women listeners would want to listen to other women. The next frontier for women is the morning drive time, and the fact that two women are doing it alone in a small market like Augusta is remarkable, Ms. Fram said.

“It’s extremely rare,” she said. “It hasn’t been proven it can be successful. It’s a great test market to try it out, and I applaud them for doing it.”

“They’re always … miscast as bimbos or sidekicks or sex objects on radio,” he said. “Channel Z’s thing has always been to do something a little different.”

The show is more like eavesdropping on a morning office conversation between two slightly hyper co-workers who laugh at the news and play “modern rock” and just kind of hang out.

The key word they throw around is wanting the show to be “relatable,” something they say they hear back from listeners.

“I could come up to you if I saw you out at a bar somewhere, and you’d talk the same way to me,” Ms. Kayle said male listeners have told her.

For Ms. McLain, 32, morning radio is a second career after a stint as a newspaper reporter. She was an education reporter with the Marietta Daily Journal when she began looking for a second career and answered an ad for a late-night position at WNNX in Atlanta pulling together newscasts for the morning show. Her big break came when the show’s public affairs reporter left and she got thrust into interviewing.

After Ms. McLain finished taping her first interview, she expected the worst. “They’re going to fire me.” They offered her the job.

For her, doing the morning show is like working on a big story on deadline.

“You’re working toward that one big rush, and then it’s gone and you’re waiting for the next one,” she said. She spends every morning prowling the Internet for news and pulling together short items for her newscasts.

For Ms. Kayle, 33, the show is a radical departure from the ones she left behind in Virginia. There she was the designated sex object for a rowdy morning show on a classic rock station. One of their gag ideas was for her to announce she was going to the bathroom. Then the male crew members would pretend to overhear her on the intercom “making orgasm noises” in the general manager’s office.

With their show, there are no gags, no planned stunts or bits or characters,” Ms. McLain said.

“It’s just extensions of ourselves,” she said. Though they hate labels, their personalities do come through. Ms. Kayle comes across as the sweeter, more trusting type, who ends up playing the straight woman for occasional barbs from the more cynical, pop-culture maven Ms. McLain. A typical on-air comparison – taking a security quiz, Charly doesn’t see anything wrong with always answering her phone at home; Tracy never answers her door unless she’s expecting somebody.

“We get off the air and we were just kind of shaking our heads at each other like, `You’re weird’,” Ms. McLain said.

“We try very hard not to be fake,” Ms. Kayle adds.

Listeners seem to be picking up on it. At a recent “remote” broadcast from Rio Bravo restaurant, Ms. McLain had a chance to meet with some of the show’s fans, many of whom apparently are soldiers at Fort Gordon.

“Everybody wakes up to 95.1 (WCHZ),” said Paul Morris, a soldier who is originally from Merced, Calif. “When they first started out, they were sort of shaggy. They’re much improved.”

His buddy Zippy Eichhorn got Ms. McLain’s attention with the small gold ring pierced through the left side of his neck.

“Oh my God! Does that hurt?” she said, reaching for the little ring. “Can I touch it?”

The remotes give the disc jockeys a chance to meet the listeners and get feedback on the show, and for the most part it’s positive, Ms. McLain said.

There was one letter denouncing them as silly, giggling airheads. They insist they do not giggle. (Actually, they do often laugh at each other.)

While they strive to prove themselves, what they do in radio is just a reflection of what’s happening outside the booth as women redefine their roles and struggle to break down barriers.

“We shouldn’t take a back seat, not in today’s society,” Ms. Kayle said.

The show gets feedback from professional women listeners getting kids off to school before leaving for work or driving to school to become doctors.

“The best thing is when you get a 16- to 17-year-old girl coming up, or the mother comes up and says, `I wanted my daughter to meet you,”’ Ms. McLain said.

The show has premiered since the last radio ratings book came out so there’s not much to judge it by, other than the volume of calls, letters and e-mail, which is triple what the previous morning show got, Mr. Hall said. The most recent ratings period ended two weeks ago, but it will still be about a month before the show’s true ratings are in.

Regardless, Mr. Hall said he is sticking with the experiment.

“I’m committed to that morning show as long as they want to work together and be together,” he said.